The collection of tektites, bodies of natural glass formed by the impact of meteorites on the Earth’s surface, contains 13,891 inventory items (23,351 pieces), primarily Bohemian and Moravian moldavites, and also some foreign tektites. 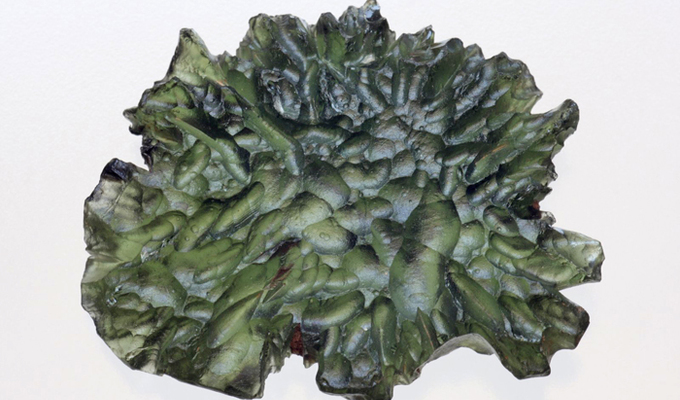 Currently (2018), the collection of tektites of the National Museum contains 13,891 inventory items (23,351 pieces), primarily Czech (20,800 pcs) and Moravian (1,700 pcs) moldavites; tektites from abroad make a smaller portion of the collection, in particular from Australasia (indochinites, philipinites, thailandites, billitonites, javanites, australites, tasmanites) and America (bediasites, georgiaites); and there are a smaller number of impactites (Libyan desert glass and irgizites). The moldavites in the collection of tektites form the largest public collection of moldavites in the world, which is significant not only thanks to the number of represented locations (140), but also due to the variations in their shape, colour and size. The largest South Bohemian moldavite in the collection is the specimen from Strpí weighing 111g; the largest Moravian moldavite in the collection weighs 235g and comes from Kožichovice. Among the foreign tektites, the rare 2 cm button-shaped australite stands out. There are three unique moldavites in the National Museum’s collection, found (and also thoroughly documented) in Central Bohemia; two of them come from the sand mine in Prague, Kobylisy, and one from the sand mine in Jeviněves near Mělník.