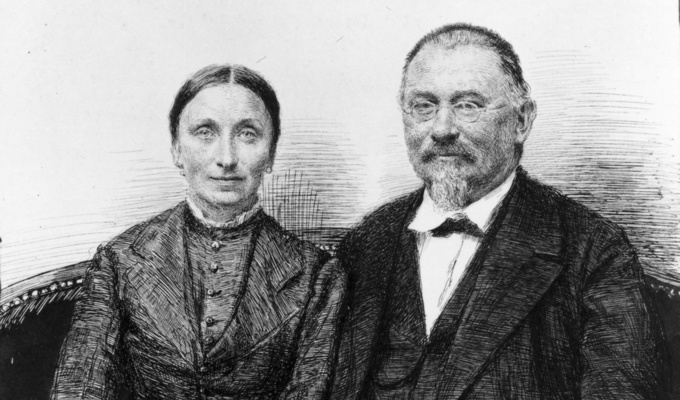 This sub-collection consists of objects originating largely in the 19th and the early 20th centuries, and holds objects mostly from the estates of the Fingerhut and Náprstek families, numbering 2,600 items. It includes several artefacts documenting the brewery and distillery trades previously pursued in the house U Halánků in Prague Old Town (currently the museum building), and the flour shop belonging to Náprstek's aunt (wooden buckets, measuring tools, jars, containers and scales) in the  Petrská čtvrť district. Further, it includes the typical equipment of a bourgeois household, including furniture, cookware, tableware and small accessories (statuettes, clocks, vases, candlesticks, table cloths, etc.). A numerous and very valuable section consists of paintings by both anonymous and renowned artists (Chittussi, Braunerová, Švabinský and others).  There are also personal objects, such as jewellery, and small items, like pens and souvenirs.  In the collection we also find interesting artefacts associated with Náprstek's activities for the Ladies' American Club, which is the earliest Czech educational society for women. These are mostly items (like drums and drumsticks, skipping ropes, badminton racquets, and so on) used in school trips that were organized for pupils of Prague schools by the Society's members. Some of the items in the collection used to be held in Náprstek’s Czech Museum of Industry.   These include the set of almost 400 didactic boards, purchased by Vojta Náprstek in London in 1862, and the set of historical daguerreotypes and vitrotypes.  This sub-collection also contains items from the estate of Julius Zeyer (paintings, souvenirs, personal objects), as the furnishing of Zeyer’s apartment with numerous art collections was part of the original exhibition of the Náprstek Museum. These objects were later passed on to other institutions, but several of the artefacts in the sub-collection recollect this fact. There is also the unusual set of items illustrating the life and work of the Náprstek family and their friends, consisting of funeral and commemorative ribbons from wreaths and bouquets and urns with the ashes of the deceased.  The interior furnishing of the Náprstek Library, which has been preserved intact in its original form, with the exception of the bookshelves, is a completely unique set. The furniture, prints and paintings invoke the times when the leading Czech 19th century politicians, scientists, artists and writers met here.

The Náprstek Inventory collection was put together gradually. First, Vlasta Náprstek’s personal objects were collected, after his death in 1894; subsequently, other documents of his activities were added as they were being removed from library collections (for example diplomas, letters of gratitude, etc.). In 1907, after the death of Josefa Náprstková, items from the estate of Náprstek's wife were added, and gradually the librarians of the Náprstek Library expanded the collection with added finds from their fonds. Only in the 1990s was the collection removed from the library records to become an independent sub-collection, the most recent in the Náprstek Museum.