The collection consists of the following sub-collections: skeletal remains of past populations, evidence of human phylogenetic development, pathological changes on skeletons and soft tissues, death masks of important figures. 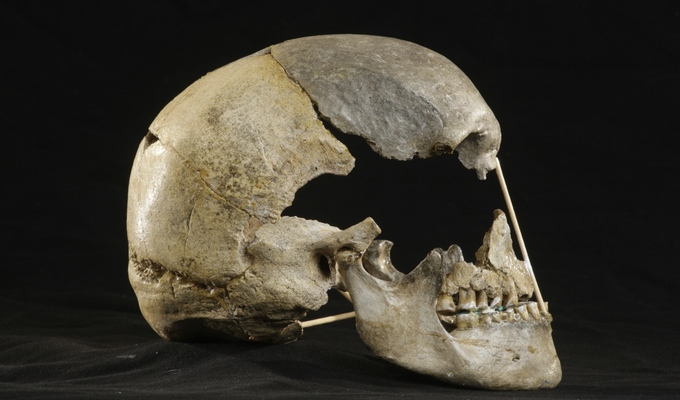 The beginnings of the anthropology collection are linked to the work of the 19th century archaeologists Josef Vojtěch Hellich and Lubor Niederle. However, the systematic building of the anthropology collection came only after the foundation of this department. Currently, the anthropology collection numbers over 30,000 collection pieces organized in thematic groups. Each of these sections is valuable for different reasons and is beneficial for different fields of study. The largest and the fundamental section of the archaeology collection contains human skeletal remains from graves excavated during archaeological research in Bohemia, Moravia and Slovakia. It holds the contents of almost 25,000 skeletal and urn graves, which illustrate the biological variability of humans from the Early Stone Age to the Modern era. It is one of the largest osteological collections of the previous populations of Europe. Although another of our sub-collections documenting human phytogenesis holds “mere” cast fossils from around the world, it also holds two true-form fossils, which are commonly cited in paleoanthropological overviews of finds. They are: a cast of the cranial cavity of a Neanderthal man in travertine from Gánovce u Popradu, which proves the previous existence of a Neanderthal population in Central Europe; and the remnants of an anatomically modern human dating from the Upper Paleolithic, excavated in the cave Zlatý Kůň near Koněprusy. This sub-collection also contains the remains of monkeys from the late Tertiary and early Quartenary from locations in Ivanovice near Trenčín, Hajnačka near Filakov and Zlatý kůň.

The third sub-collection holds samples of pathological changes and deviations on skeletons and the soft tissues of the human body. It consists of approximately 6,000 items that date from the second half of the 19th century and the first third of the 20th century and were transferred to the National Museum from the 2nd pathology and anatomy clinic of the 1st Medical Faculty of Charles University. It is an extremely valuable collection in terms of the history of medicine and comparative anatomy, as we know the basic demographic data of the patients, their diagnosis, and in some cases also the course of the illness. The collection is also important as a reference, allowing the study of the symptoms of various diseases that current medicine does not have to fight against any more. The collection includes a set of mounted skeletons illustrating general growth disorders, a set of diseased pelvic skeletons and long bones, skulls with syphilitic caries, skulls showing premature closure of the cranial vault, and samples of various healed or deadly wounds. Finally, there is a collection of death masks and skull and hand casts of important figures of Czech history (for example, T. G. Masaryk, Jan Masaryk, E. Beneš, B. Martinů, V. Náprstek, J. E. Purkyně).

Identifying the most valuable items in the anthropology collection would be very difficult. These fonds are valuable as a whole. The unique finds of extensive Early Mediaeval burial grounds (for example, Mikulčice – Valy), thanks to their “narrow” dating and the number of individuals, allow a population approach to research, for example into the state of health of the population. The collection items documenting the occurrence of diseases and the level of medical care in the past is of great documentary value. There is, for example, a unique find of a skull of a boy with a fusion of the jaw joints on both sides from the Great Moravia period (the 9th to 10th centuries), excavated in the Rajhradice site. The fusion occurred due to a jaw injury the boy had suffered in his childhood. Although the child must have been able to receive only liquidized food, yet he managed to live with this handicap for over 10 years, which indicates a high level of social empathy in the society that must have looked after this individual at that time.