The collection contains 519 pieces, with all of the basic types of meteorite, i.e. chondrites, achondrites, pallasites, mesosiderites, iron, Moon and Martian meteorites. 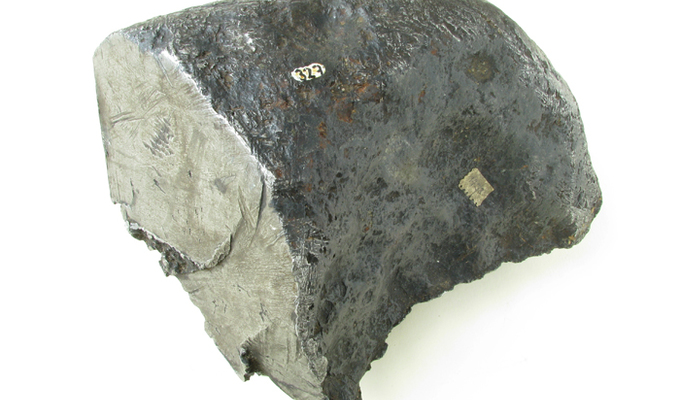 The National Museum’s collection of meteorites was founded by Prof. Karel Vrba (curator of the minerology collection between 1882 and 1922), who understood the importance of meteorites as material for the study of the origins and development of the Solar system and the Earth.  He selected the first, smaller group of meteorites from the mineralogy collection, and soon began to expand it with various purchases. In 1904 Vrba opened the first meteorite exhibition. Gradually, the collection grew to the current 519 inventory items under its other curators: Karel Tuček, Marcela Bukovanská, Jiří Litochleb and Dalibor Velebil.

The collection is of great value, as it contains the majority of historical meteorites samples representing the individual classification groups, often cuttings from type material: samples of the oldest precisely dated meteorite, Ensisheim, from 1492; the famous Mauerkirchen meteorite, which fell in 1768; and the carbonaceous chondrite meteorite Orgueil (1864). The unique carbonaceous chondrite Mighei (fell in 1889), the Novyj Urej achondrite (fell in 1886; one of the subcategories of achondrite – ureilite – is named after it), the Martian meteorite Nakhla (nakhlite) and nine pieces of eucrite from the impact in Stonařov, Moravia (1808) are equally important. There are also the historically significant Krasnojarsk pallasites (found 1749; four larger samples in the collection) and others.

Out of the major classification groups, chondrites are prevalent in the collection, with iron meteorites being generously represented, too. Altogether, 350 meteorite falls and finds are represented in the collection. The significance of the National Museum’s collection of meteorites also lies in the fact that it contains 53 specimens of single meteorite pieces from the majority of falls and finds that have occurred in the Czech Republic. These are the meteorites Loket (fell ca 1400), Ploskovice (fell 1723), Tábor (fell 1753), Lysá (fell 1808), Stonařov (fell 1808), Žebrák (fell 1824), Bohumilice (found 1829), Blansko (fell 1833), Broumov (fell 1847 – the third observed fall of an iron meteorite in the world), Těšice (fell 1878), Stará Bělá (found 1898), Teplá (found 1909), Vícenice (found 1911), Opava (found 1925), Sazovice (fell 1934), Ústí nad Orlicí (fell 1963) and Police (fell 1969). The largest meteorite in the collection is the iron meteorite Campo del Cielo (Argentina), weighing 83 kg, acquired in 2018. In the same year, a rare Martian meteorite NWA 6963 (Marocco, 122 g) and a Moon meteorite NWA 10203 (Mauritania, 79 g) joined the collection. In 2013, two specimens of meteorite were acquired from the fall, abundantly covered by the media, of the Chelyabinsk meteor in Russia on 15. 2. 2013.The second largest meteorite in the collection is the 69 kg iron meteorite Canyon Diablo. It is a fragment of a large meteorite that, when impacting the Earth, created the famous Barringer Crater in Arisona, U.S.A. – the very first recognized impact crater in the world.