The major part of the mycological collection consists of herbarium mushroom specimens, wet preparations, fruiting bodies in the collection of individual items, paintings and photographs of mushrooms, mycological publications and archival materials. 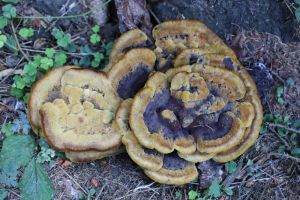 The most famous mycologist to work in the National Museum was August C. J. Corda (1809–1849). Both of his greatest mycological works concerning mainly microfungi – “Icones fungorum hucusque cognitorum“ and “Prachtflora europäischer Schimmelbildungen“ – were conceived in the museum. The type material that Corda used to define a large number of new species of fungi makes one of the most valuable and rare fonds in the mycological department.

After Corda, who died tragically in 1849, there was no one in the National Museum who would study fungi systematically. From that time until 1930 the mycological collection stagnated. The situation was somewhat different for lichen, which were studied in the early 1920s by the custodian of the botanical department, Edvin Bayer.

In 1930 Albert Pilát (1903–1974) came to the museum. He began exceptionally intensive and focused work on the organization of the modest private mycological herbaria, which began to grow rapidly. He achieved this with his own collecting activities in the Czech lands, Slovakia and above all what was then Carpathian Ruthenia, and by acquiring private collections from many of our mycologists and mushroom pickers. He also acquired precious material in exchanges with mycologists from abroad. It is to the credit of Albert Pilát that the National Museum became the centre of interest of all our scientifically working mycologists.

In 1948 A. Pilát became head of the botanical department, where he continued to develop the mycological and lichenological departments. In 1946, the coming of Mirko Svrček meant more support for mycology. He soon became a globally respected expert in sac fungi (Ascomycota), some groups of gilled mushrooms (Agaricales) and other fungi. Under Pilát's management, the mycological and lichenological sections of the botanical department focused on extensive collection-making, research and popularizing activities. The collections were expanded through the in-the-field collecting of the department’s staff, by exchange with foreign colleagues and with duplicates received by A. Pilát and M. Svrček from mycologists from around the world. Purchases and bequeathals also played an important role.

In 1965 the mycological department became independent and took over the fungi and lichen collections from the botanical department. A. Pilát became the head of the independent mycological department. After his death, Zdeněk Pouzar was appointed the head of the department. He mainly developed the study of polypores, corticiaceae and some sordariomycetes. The collections were further expanded, and at present the total number of items is nearing 500,000. This number, and particularly the rich scope of the material from some European and Asian areas, means that the mycological and lichenological herbarium of the National Museum rank among the largest in Europe and in the world.

The creation of the exsiccate collection "Fungi selecti sxsiccati," organized in the 1970s and 1980s by M. Svrček, became a significant source of rare materials from abroad. In exchange for rare species of fungi from Czechoslovakia, the mycological department acquired specimens from practically all around the world. In the 1980s the type material collection started forming, holding individual type material of newly described fungi and lichen. Type material is of immense scientific significance and forms the most valuable part of any herbarium.