The petrographic collection holds over 24,800 recorded items. The core of the collection consists of samples of rocks from the Czech Republic, with only a smaller section containing rocks from Europe and around the world. 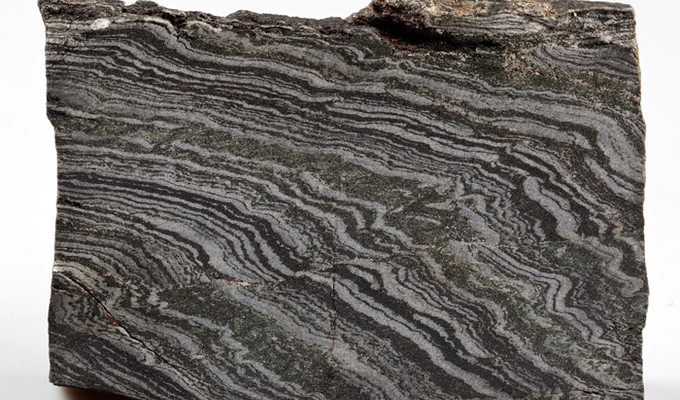 The petrographic sub-collection of the department of mineralogy and petrology is a set of over 24,800 recorded items. The beginnings of the collection date to the 1830s and 1840s, and are connected primarily with the work of the curator F. X. M. Zippe and his successors, Jan Krejčí and Emanuel Bořický. The main part of the collection consists of rocks documenting the geological structure of the Czech Republic, or more precisely the former Czechoslovakia. Only a small number of items come from other European and worldwide locations. The collection is held in storage cabinets in depositories in Horní Počeřice, and it is classified primarily according to the petrological system, and subsequently according to the regional geological classification of the sedimentary rocks of the Bohemian Massif. Rocks from the rest of Europe and worldwide locations are stored together. Large-scale samples numbering several tens of pieces are stored separately on shelves. The fonds of decorative stones, numbering ca 1,200 catalogued items, is stored outside the petrological system.

The documentation of the petrological sub-collection is fully digitalized, including the location list for all items. The second level cataloguing is supplemented by 54 items of additions and 665 items of accompanying documentations. Among the items of the petrographic collection that stand out, there are, for example, a set of Archean rocks from West Greenland (Isua unit), which are among the oldest rocks in the world (about 3.7 billion years), and specimens of orbicular quartz diorite from Muckov, Czech Republic, which represents the unique occurrence of this type of rock on Czech territory. The petrological collection is still being expanded, primarily by in-the-field collection by the department’s staff. Recent acquisitions include Archean and Proterozoic rocks from Finland, the orthogneiss from Rájov, the oldest rock in the Czech Republic (dating to 2 billion years ago), and the stromatolitic silicites from Kokšín, which are the oldest evidence of the presence of life on Czech territory.