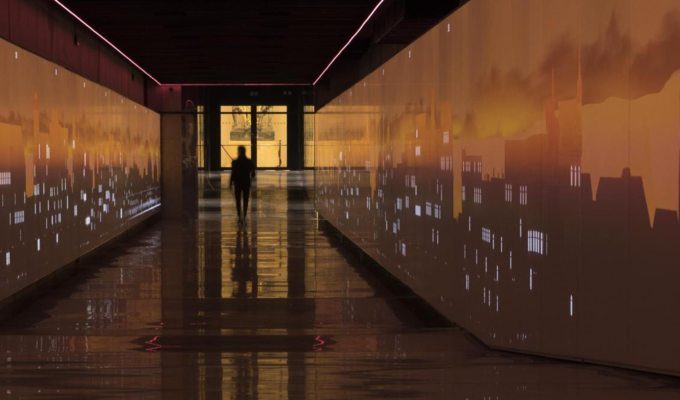 On 17. 11. 2019, the National Museum opens a singular multi-media exhibition in the connecting corridor, which is dedicated to the tumultuous events of the 20th century that took place in Wenceslas Square, from the foundation of Czechoslovakia to the turn of the millennium. It will also give a glimpse of the everyday life of this space. The second multimedia programme is dedicated to the architectural development of this place, from the 19th century to the present. This is a unique multimedia project which is unparalleled in Europe with regard to its technological and projection features.

Moments of Metropolitan Nascency
The original Gothic square with Renaissance and Baroque buildings transformed into a broad avenue during the 19th and 20th centuries. This avenue became the centre of modern Prague. The square's buildings bear testimony to this change as they refect the ambitions and style of their time.

A timelapse animation captures the transformations of the 60 buildings of today's square. One second of the film represents one year in real life. During 1860-1939, 66 buildings change, whereas only 14 buildings are modified during 1939-2019.

Trees are planted in 1875. They are subsequently cut down and then re-planted. Križík's arc lamps replace gas lamp-posts on the eve of electrification. These are then substituted by neon façades. The gloom of war bombardment passes into the illumination of communist banners and further into the current smog of LED nights. While windows of residential buildings were alive with life in the 1930s, today, they remain dark with only shop windows glowing.

The film prologue presents what could have been found in the area of Wenceslas square during the Paleozoic ocean era or at the very beginning of the universe.

Moments of 20th Century History
We look into history against the stream of time. From the turn of the century, we return to the euforia of the 1989 revolution. Then we find ourselves amongst the empty rituals of normalisation. Another breaking point is the 1968 occupation. The area is full of celebrations of communist totalitarianism during the 1950s. Shortly before the accession of communism, people on the square are being coerced into vowing their loyalty under Nazi rule. All this is preceded by a candid belief in the Czechoslovak Republic after 1918.

We process film material taken on Wenceslas square, and we exhibit it as a museum showpiece.

We represent each topic with a strip of eight situations, which reoccur across the historical incidents. They are divided into two categories: action and reaction. Symbols, power forces and situations form the actions. The reactions include shots of individuals and the masses.

We examine the anatomy of incidents, their internal structure. We observe what makes them unique but comparable and reocurring at the same time.

The concluding part focuses on ordinary scenes, which took place on Wenceslas square in the background of elite history.

Imprisoned in time, we are flowing through daily life, which partly steadily evolves and partly radically transforms during changes of the political system.

Contrasting light effects in the Passageway can be potentially dangerous for people with epilepsy.

The Historical building can be accessed through the main entrance as well. 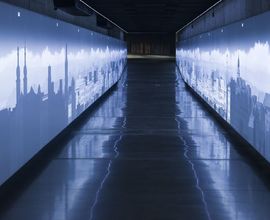 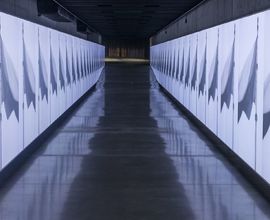 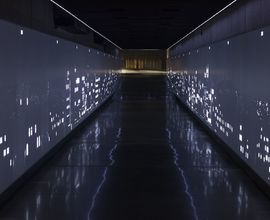