The Chinese collection encompasses the period from the Neolithic to the present. However, the majority of items originate in the 18th and 19th centuries. The collection represents mostly artisan crafts, paintings, pottery, porcelain and textiles. 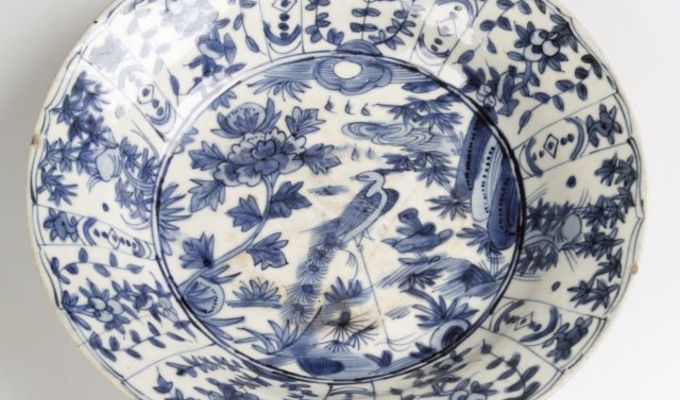 Originally, the Chinese collection was not put together systematically. It was built up from gifts and purchases on the European antiques market, and at the 1874 World’s Fair. These were small artisan works. Later came donations of small items from people working in China. In the late 19th century, travellers like Josef Kořenský (1847–1938) and Enrique Stanko Vráz (1860–1932) brought larger collections from their journeys. The postal service clerk Antonín Römer (dates unknown) donated a collection of anonymous colour woodblock prints. The marine officer Václav Stejskal (1851–1934) visited China, Japan and the countries of today’s Indonesia and Malaysia between 1886 and 1888 on board the frigate Aurora[e1]. Later came the collections of artists and university teachers that had not visited China, but were greatly interested in it. The collection of handicrafts comes from Prof. Rudolf Dvořák (1860 – 1920), the founder of sinology in the Czech lands. The writer Joe Hloucha (1881–1957) is known as a collector of items from Japan, but his collection also includes many artefacts from China. The collection of wooden religious sculptures and clay tomb figures belonged to the painter, musicologist and ethnographer Ludvík Kuba (1863–1956). Růžena Trnožková, the wife of a trade counsel (dates unknown, active in the 1920s and 1930s), donated the collection of Chinese and Japanese textiles to the museum. In the second half of the 20th century, the Chinese collection was expanded with the collection of the photographer and collector Bedřich Forman (1919—1985).

The Chinese collection is divided into several sections. There is the collection of paintings on silk and paper in the form of vertical and horizontal scrolls, album folios and paintings on fans. Thematically, the collection can be divided into landscape painting, figure painting, flower and bird painting and religious painting. There is also a significant set of traditional New Year Pictures, which are anonymous coloured woodblock prints. The artworks from the Qing Dynasty period are the most numerous in the collection, particularly those from the 18th and 19th centuries. Several paintings date from the 17th century. There is also the significant collection of Chinese ancestor portrait paintings, dating from the late Qing Dynasty. The set of late 19th century paintings on rice paper numbers several hundred pieces. The first half of the 20th century is represented by the works of world famous artists. The sculpture collection consists of a set of tomb figures dating from the Han and Tang Dynasties. The collection of Buddhist sculpture is quite extensive. The collection of bronze objects is relatively small, but contains cloisonné and champlevé pieces, the oldest of which originated in the Ming Dynasty. In the collection of metal objects, there are several specimens of archaeological material from the period before the common era. Enamel painting on metal is represented mostly by objects from the 18th and 19th centuries. Another group consists of carvings in various materials - stone, gemstones and ivory, dating mostly to the 18th and 19th centuries. There is also an important collection of Chinese snuff bottles made out of various materials. A large proportion of the whole collection consists of pottery and porcelain. The oldest vessels date from the Neolithic. Examples of almost all the basic techniques are found here, from the first glazes to celadons, monochrome glazes, blue-and-white porcelain and the painted enamels. The textiles section includes traditional clothing – mostly from the second half of the 19th century and the first two decades of the 20th century. There are mostly embroidered women's jackets and skirts and semi-formal men's garments - the Dragon Robes. Pieces of clothing are supplemented with clothing accessories, footwear, men’s caps, women's embroidered sleeves and traditional official badges of rank.  There are also interior textiles (curtains, throws, etc.). The Náprstek Museum also holds a collection of Chinese musical instruments and a collection of colonial and orientalised furniture