The items in the Lamaism collection come from Tibet, China and Mongolia. They include religious paintings, bronze sculptures of deities and ritual objects. 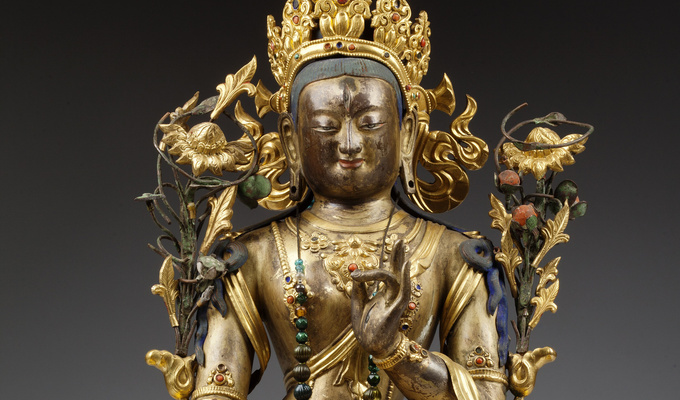 The Lamaistic items in the National Museum collections consist of artefacts from Tibet and Qing Dynasty China (1644–1911) which were acquired in the late 19th century and the first half of the 20th century. These items are of a purely religious character. They include religious paintings, tempera on canvas paintings for temples, some of which date from the 18th century, representations of deities in bronze and ritual items. A number of the bronze sculptures bear a mark dating them to the 18th century, the time of the Qianlong Emperor. In the second half of the 20th century, the Náprstek Museum gradually acquired the collections of Czechoslovak experts that worked in Mongolia for the Comecon organization. In this way, the collections were enriched with: religious paintings and ritual objects of Tibetan Buddhism from Mongolia; small utility items like knives, tinderboxes and smoking utensils; and, most importantly, a collection of several hundred Buddhist amulet paintings. Besides the artefacts associated with Buddhism, this collection contains the attire of a shamaness from the area from today’s Tuva, with all the accoutrements and a shaman’s drum. The set of Tibetan and Mongolian clothing and jewellery is very small. The collection also contains a complete Mongolian yurt with basic equipment.