The Diptera sub-collection contains over 250,000 dried specimens. Further, it contain a great number of alcohol-preserved specimens and also 30,000 microscopic specimens. 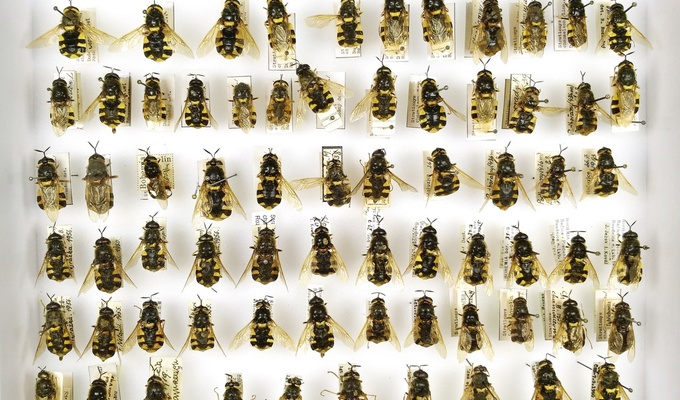 In 1953, Josef Moucha (1930–1972) became the first curator of the Diptera collection of the Entomological Department of the National Museum (1930–1972). He was a famous expert on butterflies and two-winged insects, and an enthusiastic populariser of entomology. His collecting and exchanging activities were very productive, and over the years he gathered two-winged specimens from the Czech lands and Slovakia, neighbouring countries (Austria, Germany and Hungary), southeast Europe (Albania, Bulgaria and ex-Yugoslavia) and also Georgia and Iran. Josef Moucha's research focused primarily on the following families in the Diptera order: horseflies (Tabanidae) and robber flies (Asilidae); and partially also on hoverflies (Sarphidae). The most numerous section in the Diptera collection is the Tabanidae family (horseflies), founded by Josef Moucha and extended by his colleagues (primarily M. Chvála and J. Ježek). The collection of horseflies contains over 5,000 specimens and around 100 type specimens. Josef Moucha published 106 articles about the Diptera, 96 articles about butterflies, 37 articles with other topics and 11 books. In 1971, he became the Head of the Entomological Department of the National Museum. Unfortunately, his great career was ended prematurely in 1972, when J. Moucha died in a car accident.