The collection of beetles is the largest of the insect collections in the National Museum. It contains approximately 5 million specimens, mostly dry, in entomology boxes. 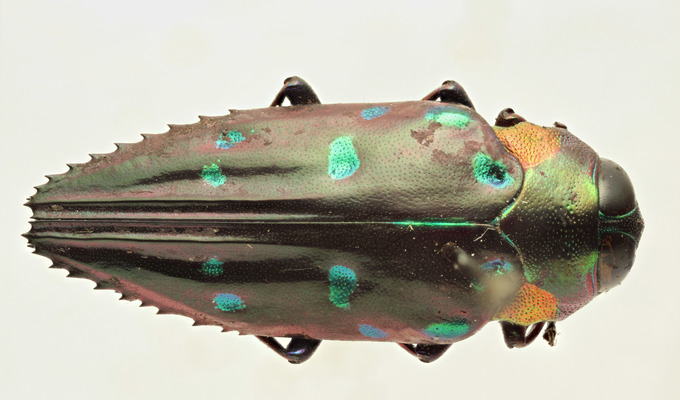 The collection of beetles is the largest collection in the entomological department, containing approximately five million specimens. The core of the systematic collection of beetles is the collection of three generations of Nickerls, which includes the material collected by E. Holub on his journeys through Africa. The collection of J. V. Helfer, numbering 200,000 specimens, collected mostly in the Tenasserim region, is very valuable. The greatest expansion of the beetles section occurred with the coming of J. Obernberger, who was a leading figure of Czechoslovak entomology in the first half of the 20th century, and who initiated the foundation of the independent Entomology department. During the 1920s he published an appeal in a newspaper to Czechoslovaks living or travelling abroad to collect insects for the Entomology department. His appeal met with a great response and much material began to come to the department. Among the most significant contributors was J. Mráz, who within several years sent 300,000 specimens to Prague, mostly beetles collected around Sao Paulo. Other materials that were acquired in a similar way are the collections of J. Bauma from around the world, the collections from the vicinity of Baghdad of the famous doctor V. Kálalová–di Lotti, and the collections of B. Machulka from Africa. At the same time, Obenberger himself intensively collected specimens from Czechoslovakia and the neighbouring European countries, and he organized an expedition to Africa. His activities left the museum with many large collections, namely those of J. Achard, A. Fleischer, R. Formánek, E. Lokaj, jr., B. Kouřil and F. Rambousek. In 1940 he employed J. Bechyně as the department’s assistant. Bechyně contributed significantly to the evaluation of the Colorado leaf beetles collection and identified hundreds of new taxa. Obenberger himself was a leading expert on jewel beetles (Buprestidae), and he gathered a huge collection, numbering several hundreds of thousands of specimens, which is one of the most comprehensive and largest collection of this family in the world.

From the mid-1950s the museum acquired other valuable collections of experts on selected groups of beetles, for example V. Balthasar, L. Heyrovský, J. Hlisníkovský, E. Jagemann, A. Jedlička, J. Král, A. Matějka, J. Pulpán, and A. Pfeffer. Recently, the museum managed to purchase significant collections from M. Dvořák, L. Hromádka and D. Král. The extensive collections of S. Kadlec and S. Pokorný were donated to the Entomology department.

The department's staff have collected a great number of specimens during various expeditions, for example to Turkey (1947) and Iran (1970, 1973, 1977). The expeditions to Iran in particular were very fruitful for the department, and thus the Entomology department holds possibly the largest collection of Iranian insects, numbering several hundreds of thousands of specimens. At the same time, the department's specialists also greatly contributed to the development of entomological collections and were among the world's leading experts on selected beetle families: S. Bílý (Buprestidae), J. Jelínek (Nitidulidae), V. Švihla (Oedemeridae, Cantharidae) and I. Kovář (Coccinellidae). Currently, the department’s staff are focusing on the further processing and expansion of its collections. They focus primarily on the systematic organization of water beetles (Hydradephaga, Hydrophiloidea) and leaf beetles (Chrysomelidae). The most significant achievements of the last decade have been the expeditions to Socotra Island, during which a large number of new species were collected.

The collection of beetles contains several tens of thousands type specimens and is currently being catalogued. From among the type material, the jewel beetles section is the most valuable, thanks to the intensive work of J. Obenberger and S. Bílý, along with the leaf beetles section, which benefits from the bequeathal of J. Achard, whose collection contains type material of the giants of 19th century entomology.