The collection of Hemiptera insects includes approximately 410,000 specimens of true bugs (Heteroptera), Auchenorrhyncha, psyllids (Psyllomorpha), scale insects (Coccoidea) and whiteflies (Aleyrodoidea) from around the world, primarily from the Palearctic. 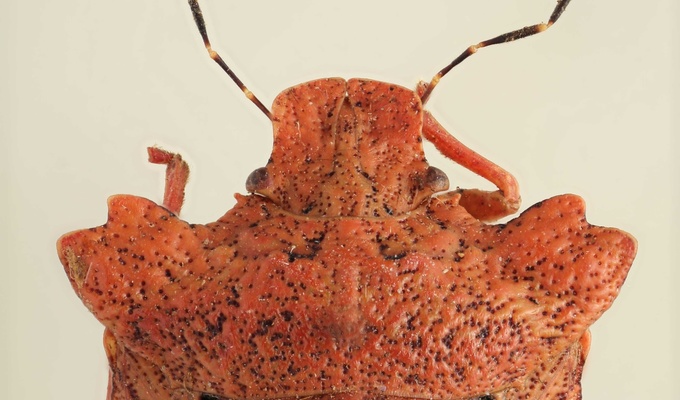 The collection of Hemiptera includes approximately 410,000 specimens of true bugs (Heteroptera), Auchenorrhyncha, psyllids (Psyllomorpha), scale insects (Coccomorpha) and white flies (Aleyrodomorpha). The Ladislav Duda and Ottokar Nickerl collections from the late 19th century make up the core of this sub-collection. In 1945 it was greatly expanded thanks to Ludvík Hoberlandt (true bugs), Jiří Dlabola (Auchenorrhyncha) and Jiří Zahradník (scale insects and white flies), who formerly worked in the Entomological department of the National Museum.

Species from Europe and other parts of the Palearctic (from the Mediterranean to China) are the most numerous in the collection. The collections of Hemiptera from Iran, Afghanistan and Socotra are truly unique. The Hemiptera collection contains hundreds of pieces of type material for species defined by Czech entomologists, and also those acquired by exchange with foreign institutions. Type material is catalogued and the catalogues are published (for example Acta Entomologica Musei Nationalis Pragae 2013/53: 821–890, 2015/55: 411–443, 2016/56: 423–446). The overwhelming majority of true bugs, Auchenorrhyncha and psyllids are stored as dry material mounted on entomological pins or carded and stored in entomology boxes. Only a small proportion of the specimens are fluid-preserved or mounted on microscope slides. The collections of scale insects and white flies come as boxes or microscopic slides; a smaller proportion of material is dry- or fluid-preserved.

The core of the true bugs collection (ca 220,000 specimens) is a systematic comparison collection gathered by L. Hoberlandt, which currently contains almost 7,000 species (globally, approximately 45,000 species are described). The most valuable part of the collection is the type material, including the primary types of about 200 species. The comparison collection further includes thousands of undefined specimens, which are gradually being processed by experts from the Czech Republic and abroad. From the historical point of view, the material relating to true bugs from the Czech Republic, Slovakia, Turkey, Iran, Afghanistan, Mongolia, Socotra and Angola, which became the basis for major local monographs, is essential.

The Hemiptera collection includes approximately 180,000 specimens of Auchenorrhyncha, 6,000 psyllids, 1,900 microscopic slides of scale insects (ca 120 species) and 781 preparations of white flies (27 species). The largest part is the collection of Auchenorrhyncha, which contains extensive material primarily from Europe, the Mediterranean, the Middle East, Iran and Mongolia. It was scientifically processed by J. Dlabola, who described a number of new species, and the used type material is now held in the National Museum. The collection is organized as a systematic comparison collection, supplemented by some undefined material. The fonds further includes the collection of white flies (J. Zahradník) and scale insects (J. Zahradník, J. Řeháček), consisting chiefly of defined specimens from the former Czechoslovakia and the Balkans. The relatively small collection of psyllids has largely been defined by P. Lauterer and includes important material from expeditions to Iran, Turkey and Bulgaria.