The collection of Hymenoptera contains about 550,000 dry specimens and an unknown number of fluid (ethanol)-preserved items, both identified and unidentified specimens from around the world. 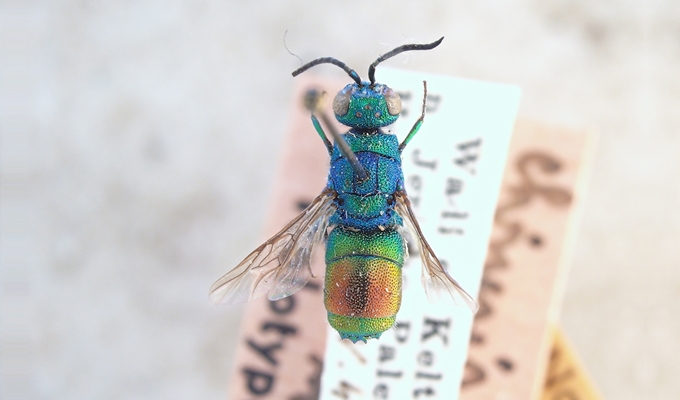 The basic collection of Hymenoptera includes an estimated 550,000 collection items. The core material comes from Central and south-east Europe. Furthermore, it holds numerous items from the joint expeditions to Iran and Turkey in the last century, and other material from collecting trips made by the staff of the Entomology department, primarily to Asia, Australia and South America.

The individual groups are represented unevenly, depending on the specialization of past and present curators. Among the most significant specialists of the Hymenoptera section is undoubtedly Zdeněk Bouček, whose collection of the superfamily of chalcid wasps (Chalcidoidea) is world-famous and among the most important collections in its field, containing the largest volume of type material (over 2,000 individual items). The greatest achievement of Z. Brouček is that as a curator he brought order to the Hymenoptera collection, which was in a state of disarray at the time, consisting of various purchases, donations, bequeathals and material gathered during expeditions of the department's staff; he made it into one unified collection. Thanks to his creative activities, the Hymenoptera collection thrived, resulting in fonds that grew from various domestic and foreign collecting trips and mutual cooperation with renowned domestic and foreign experts and museums.

Although Dr. Bouček’s role in this respect is indisputable, it would be a mistake not to mention some other external specialists, who by their work created the basis for the future development of the Hymenoptera collection in the Entomology department of the National Museum. Among the most notable are O. Šustera and V. Zavadil, who processed the Hymenoptera collection, identified the specimens and organized the collection systematically, all without payment. Their own defined Hymenoptera collections, which they later passed on to the museum, containing material mostly from former Czechoslovakia, made the main pillar of the central systematic collection of Hymenoptera; while Zavadil’s collection is admired by many experts to this day, due to the perfect preparation of materials and the careful description of specimens.

Currently, the collections are still being systematically expanded and developed by the department’s staff. The largest expansion in the past twenty years (including type material) concerns the originally very regional collection of Diapriidae, which currently includes specimens from all around the world and is among the largest in Europe. It also includes type material for newly described species from around the world, including the Czech Republic, and also a collection of symphyta, with seventeen first finds in the Czech Republic and one newly described species so far, also from the Czech.