The fonds includes representatives of small insect orders, particularly dragonflies and damselflies, stoneflies, net-winged insects, caddisflies and others. In total, the collection contains over 110 thousand specimens. 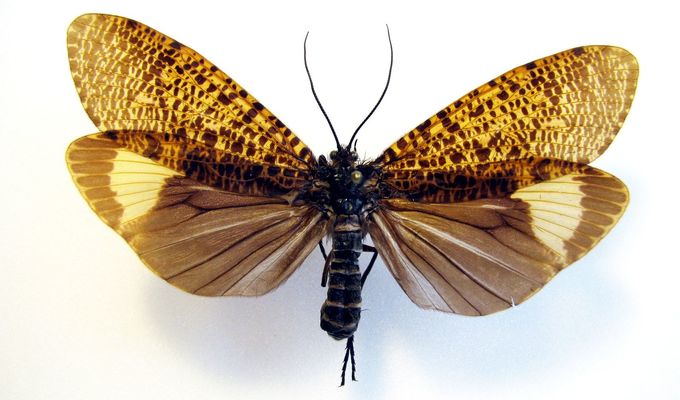 The core of the fonds consists of the historical collections of stoneflies, caddisflies, net-winged flies and mayflies of Prof. F. Klapálek (1863–1919). It is a large collection of dried specimens, containing a large share of type material (almost 500 specimens) from around Europe and, in the case of stoneflies, also from Asia and America. There is also a significant historical collection of microscope-slide-mounted thrips (Thysanoptera) from J. Uzel and chewing lice (Amblycera and Ischnocera) from K. Pfleger and sucking lice (Anoplura) from Prof B. Rosický.

The original collections are continuously being expanded with material newly collected by the department’s staff at home and abroad. This newly acquired material is usually fluid-preserved. Nowadays, the most numerous specimens in the collection are dragonflies and damselflies, stoneflies, net-winged flies and caddisflies. The collection of dragonflies and damselflies contains identified materials mostly from Europe (recently, the collection was also enriched with the odonata specimens collected by L. Brejcha from the former Czechoslovakia), and also from Iraq, Iran and Yemen (including Socotra). The exotic specimens of Odonata (primarily from Madagascar, purchased in the first half of the 20th century) so far have not been described and systematically organized. The collection of stoneflies includes a historical collection (F. Klapálek), large collections from the Bohemia from the mid-20th century (E. Křelinová) and new documentary material from Bohemia, Moravia and Silesia, which is being systematically processed. In the historical collection of net-winged insects, identified material from Europe is prevalent, and it also contains partially identified exotic material. New collections, until now only partially identified, come primarily from the Czech Republic, and also from expeditions to Iran and Socotra. The collection of Megaloptera has lately been significantly expanded with specimens of the Corydalildae family acquired during expeditions to South East Asia. The collection of caddisflies (F. Klapálek) contains dry material, mostly from Europe. In recent decades, the collection of caddisflies has been expanded significantly with new material, including several dozen type specimens from Central and Eastern Europe, the Middle East, Madagascar and South East Asia. The collections are organized systematically and stored as fluid-prepared material (in ethanol).