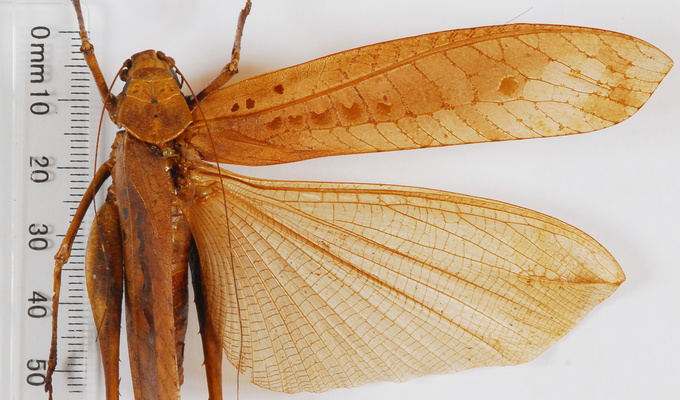 The Polyneoptera collection is one of the smallest sub-collections of the Entomological department, currently consisting of 35,000 specimens. The oldest part of the collection consists of the original private collection of Napoleon Manuel Kheil (1849–1923), which was passed on to the National Museum after his death. The orthoptera section is particularly valuable thanks to the material gathered in Southeast Asia, New Guinea and Amazonia by the Czech traveller Enrique Stanko Vráz. Most specimens collected on these journeys were still being studied in N. M. Kheil’s lifetime by the contemporary experts on orthoptera (Burnner von Wattenwyl, Bolívar, Azam, Karny); who, using this collection, described many new types of grasshoppers, locusts, crickets and stick insects. Kheil's collection even inspired Dr. J. Obenbegrer to create a study of the orthoptera of Czechoslovakia, which was published in 1926.Subsequently, the Polyneoptera insects eluded the interest of the museum staff. This changed in the early 1950s, when J. Mařan began to study the results of expeditions by museum staff to the Balkans and the Middle East. His work was followed by A. Čejchan, whose research focused primarily on the fauna of southern Europe, Turkey, Afghanistan, Mongolia and Iran. Mařan and Čejchan both actively cooperated with other experts in their field (M. La Greca, K. Harz, B. Kis, L. Mishchenko, G. Peschev, W. Ramme, S. P. Tarbinsky, B. P. Uvarov, and F. Willemse), who donated to the National Museum material from southern Europe, the Middle East and Central Asia. The intensive study of the orthoptera held in the National Museum collections ended in the early 1970s, when A. Čejchan was appointed the Director General of the National Museum. However, in the 1970s and 1980s A. Čejchan continued his intensive collecting of material on the territory of Czechoslovakia - unfortunately, the huge amount of material he collected remains largely uncatalogued.

Since the early 1970s, the Polyneoptera collection has been managed by experts specializing in different groups of insects (first I. Kovář, now M. Fikáček), which is why any research is dependent on external colleagues. Currently, the most notable of them is P. Kočárek from the University of Ostrava, who studies and processes new collections of earwigs (Dermaptera), and who has managed to discover several new species on the basis of these collections and donated type specimens of other species to the National Museum's collections.

At present, the collection is undergoing slow reorganization, the aim of which is to create a single, systematically organized central collection; because to this day, for historical reasons, most of the collection is still divided into three parts (the original collection, the comparison collection of J. Mařan and the comparison collection of A. Čejchan). Lack of interest in tropical species led to the exotic specimens being transferred, in the 1950s to 1970s, to smaller boxes. This was performed in a rather disorganized manner, often without the descriptive labels that were originally attached, and nowadays they are recognizable only by the characteristic format of the location labels and the handwritten notes they contain. For these reasons, they were later considered undetermined, and mixed with unidentified exotic material.