Tapestries in the Service of the State 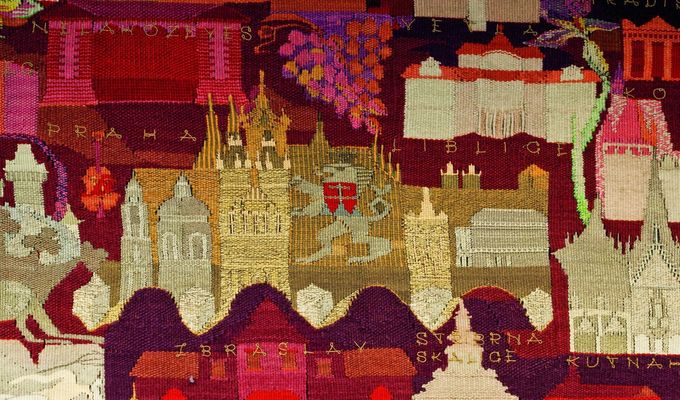 One of the National Museum’s tasks is to document areas and spaces associated with public life in the Czech Lands. As membership of a church, organisation or state was frequently presented in the form of various types of textiles that had ceremonial, ritual, aesthetic, and even propaganda value, the National Museum’s collection of artefacts includes a plethora of textiles associated with religious life (the Třeboň Antependium), life within an organisation (the banners of guilds and associations), and political parties (the banners of political parties), etc.

The National Museum’s collection also features textiles that were installed in premises linked to the official representation of the state. They played various roles. Some of them were related to state ceremony and statesmanship (textiles from the two chambers of the First Czechoslovak Republic’s National Assembly and from the Vítkov National Monument). Others were used for artistic decoration and proved the high standard of craftsmanship and art in the Czech Lands and Czechoslovakia. These include textiles from the Federal Assembly building.

The Czech Republic is not one of history’s traditional producers of weft rep tapestries (“gobelins”). Instead, the Czech Lands evidently made only embroidered wall tapestries, which date back to the Middle Ages. Gobelins were mainly imported into Bohemia from France, Flanders and Germany, and were part of the collections built up, for example, by Emperor Rudolf II. The first gobelin manufactory in the Czech Lands was founded in 1895 by Rudolf Schlattauer. Since then, the town of Valašské Meziříčí has been a traditional producer of tapestries woven using the gobelin technique. A second gobelin manufactory was set up in 1910 in Jindřichův Hradec by the artist Marie Teinitzerová, a co-founder of the Artěl group of artists. It was here that important state contracts were commissioned during the First Republic. The tapestries were designed by Czech artists prominent at the time.

At the exhibition in the western hall of the Historical building of the National Museum can be seen tapestries designed by e.g. František Kysela, Karel Svolinský, Antonín Kybal, Cyril Bouda or Věra Drnková-Zářecká.

Entrance of the exhibition without reservation.