This department is named after its main activity – but it acquires publications not only by exchange – also by purchase and gift. 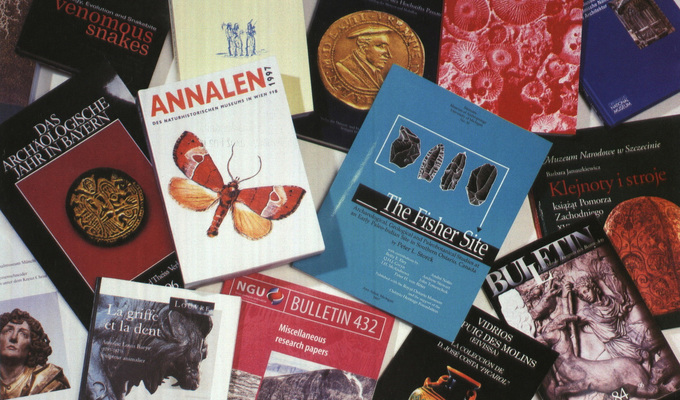 The department also assists in entering new acquisitions into on-line catalogue Verbis and maintains local catalogs of the various departments' professional libraries.
Naturally it also cares for the exchange collections. While the purchase of new materials has always been dependent on the institution's financial situation and donations are a somewhat irregular method of acquisition, the international publication exchange of the National Museum is an independent organ within the museum with a long-standing tradition.

Exchange - International publication exchange is firstly a significant source of acquiring foreign professional literature, especially the kind that is difficult to acquire otherwise, and it is simultaneously an advantageous method by which to disperse our own literature - that is, present the results of our staff's researches. This method came into common use around the end of the 18th century and continued into the 19th, which saw the first official agreement concerning publication exchange - the Brussels convention of 1886. In the 20th century came further interstate agreements and international agreements (UNESCO - Paris 1958). Expansion of the exchanges - primarily after World War II - is supported by UNESCO and IFLA. A significant result of their work is not only a set of systematic procedures for participants in such exchanges, but genuinely practical recommendations for state and international institutions dealing with postal tariffs and customs procedures.

The materials exchanged have always been scientific publications not available to the public and official institution publications, sometimes duplicates and non-standard publications, today even marketable titles. The National Museum has maintained exchange ties with foreign institutions initiated shortly after the museum's founding in 1818, even more so after founding of the museum's journal in 1827. Except for the Royal Czech Educational Exchange, the museum's is the oldest exchange in the Czech Republic. From the very beginning, its task was the acquisition of professional literature - primarily scientific and Slavonic. The evolution of exchange contacts came about primarily through the efforts of Kašpar Šternberk in the area of natural science, and Josef Dobrovský and Václav Hanka in Slavonic literature. Exchanged publications included dealer news, museum duplicates, publications of Matice Česká and the National Museum Journal, the oldest Czech scientific journal, which forms the basis of the exchange to this day. An important moment came with the incorporation of Barrande's library into the museum in 1884: foreign institutions, which until then had sent their publications to the famous geologist, now sent them to the National Museum. As far as content, initially it was largely natural scientific publications, subsequently historical branches were added to the mix. The growth of the exchange was interrupted by World War II, so the post-war years were marked by efforts to renew previous exchange contacts. The National Museum Library turned its efforts to continually expanding the exchange, as well as improving the quality of the exchanged materials, both for the central library and for the various professional departmental libraries.

Much attention was also devoted to museological literature, including that devoted to book museums. In the 1990s, the tumultuous political and social upheavals of the time left their mark. In their wake, changes in nations of the former Soviet bloc had the following effects: 1. many organizational changes in the area of science (disappearance, reorganization or "at least" moving of scientific institutions), 2. economic impacts on culture - levying of taxes on all publications from abroad (not only purchases, but also exchanges and donations), and increased postage costs, 3.ending of the state monopoly in book sales and the emergence of a new publication industry, with much broader range of subject matter and much higher quality, but an extremely chaotic character. The first two factors negatively impacted our exchange, the third, however, sharply increased foreign interest in our publication exchanges.

The National Museum Library had to deal with both the increase in postage costs and the new taxes - their vigorous enforcement threatened to put an end to our exchange program. In 1996, after several years of negotiating with the attendant institutions from both the library and museum angle, the National Museum Library was relieved of the obligation to pay the value-added tax. The exchange thus continues its tradition of acquiring valuable foreign literature - however, although restrictions on the exchange method of acquisition have been removed, financial difficulties remain. The network of exchange partners is large: around 800 institutions in 58 countries around the world. The heaviest participation is from Germany, the United States, Great Britain and France. The goal is to further improve the quality of exchanges. The value of acquired publications is roughly three times greater than what is sent out. The National Museum Library sends out exclusively periodicals, but receives in exchange, besides periodicals, a large number of valuable scientific monographs. The greatest numbers of these are in the realm of prehistory, due to the prolificacy of authors in the field and generosity of our exchange partners.

Basis of exchange fund in the National Museum is formed by