The Department of Manuscripts and Early Printed Books manages the rarest collections of the National Museum Library. These include a collection of manuscripts, a collection of incunabula, an exclusive collection of early printed books, predominantly Bohemica, and two palace libraries: the Nostitz Library and the Kinský Library. A conservation lab belongs to the Department. 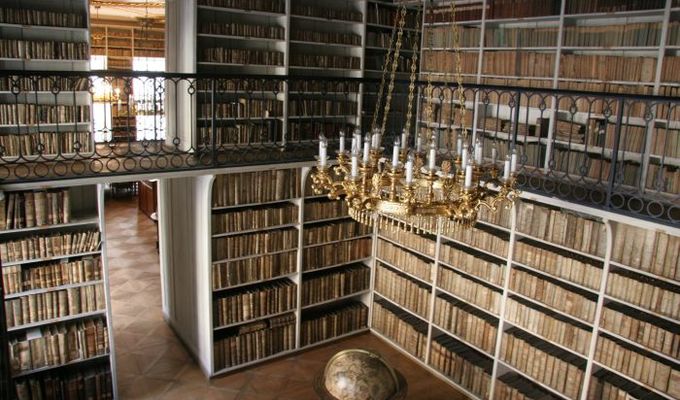 Manuscripts, early printed books and other items maintained in the collections of the Dept. of Manuscripts and Early Printed Books are available to library users in the Reading Room in Historical Building in Prague.

Documents have to be ordered with at least 3 working days in advance using the online form or personally in the Reading Room in Prague. More info at vypujcniprotokol@nm.cz or by telephone +420 224 497 342. 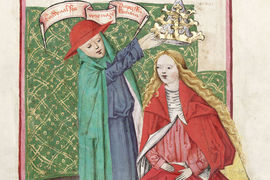 Collection of manuscripts and early prints

For many years, the main part of the research at the Department of Manuscripts and Early Printed Books has focused on the issues of book provenance and the history of libraries and reading practice. This area of book history research was the subject of the PROVENIO Project: The Method of Book Provenance Research, supported by the Ministry of Culture of the Czech Republic /MC CR/ within the Applied Research and Development of National and Cultural Identity Programme /NAKI/, which the National Museum Library implemented in 2012–2015, and the follow-up project Virtual Reconstruction of Scattered Book Collections of Bohemical Provenance in the Czech and Foreign Libraries (NAKI of the MC CR), implemented by a consortium of three institutions (National Museum Library /NML/, the National Library of the CR /NL CR/ and the National Heritage Institute /NPÚ/) in 2018–2022 and coordinated by the National Museum Library.

Unlike the previous Provenio project, focused on the research into the library collections of remarkable individuals, important families and some institutions that have been preserved as a whole or in fragments in the Czech lands, the ongoing NAKI project is aimed at the research and recording of book collections from the possession of Czech collectors that have been preserved in libraries abroad. Information on the project has been gradually published on the Provenio website and relevant book records in the Provenio online database.

The employees of the department are also engaged in other areas of bibliological and codicological research, such as the history of book illustration in the early modern period (Jana Tvrzníková), technological research into bookbinding (Karel Křenek, Jan Novotný) and legal manuscripts in the late Middle Ages and the early modern period (Zdeněk Mužík). These component research objectives are fulfilled within the Long-Term Conceptual Development of a Research Organisation (DKRVO) programme.

In the last two years, the material research into the Manuscript of Dvůr Králové and the Manuscript of Zelená Hora was conducted by a team of experts not only from the National Museum but also from other important institutions.

Printed catalogues of the manuscripts

Printed catalogues of the printed books

The Department of Manuscripts and Early Printed Books administers the most valuable collections of the National Museum Library (NML):

A part of this department is a conservation laboratory.

The foundations of the manuscript collection were laid by generous gifts from museum supporters already in the 19th century. These included the collection from the library at Castle Březnice, containing a large part of the rarest manuscripts, e.g. Mater verborum, a dictionary from the 13th century and the Jaroměř Bible, a remarkable example of the French illumination art of the second half of the 13th century. The archbishop Václav Leopold Chlumčanský gave the NML Liber viaticus and Orationale Arnesti, two manuscripts from around the middle of the 14th century, whose depictions can be found in all major works on Bohemian illuminated manuscripts. Nevertheless, the thematic composition of the collection is much broader, including works on both social and natural sciences. Like in the case of the manuscript collection, the largest part of also the collection of early printed books (25,000 volumes) consists of gifts. Besides the above-mentioned museum supporters and founders, it comprises the libraries of Franz Anton von Kolowrat-Liebsteinsky and Franz Josef von Klebelsberg.

From the beginning, the collection of early printed books focused on Bohemica, i.e. it was to contain mainly works written in Czech or otherwise related to the Czech lands. The Nostitz Fideicommissum Library, built from the 17th century, came after the confiscation in 1945 under the administration of the National Museum. It comprises approximately 14,000 volumes and continues to be deposited in the original Baroque interiors of the Nostitz Palace in the Lesser Town of Prague.

The Kinsky Library was founded through the one-time purchase of 18,000 volumes at the beginning of the 19th century. By 1945, when it was confiscated from the original owners, this number had increased to more than 33,000 volumes. Significant parts of this library include a collection of book graphic designs and literature from the French Revolution.

The main tasks of the Department of Manuscripts and Early Printed Books include the provision of access to its collections for researchers, the cataloguing and description of individual collections. Manuscripts and early printed books are accessible for research online mainly through the Manuscriptorium and Portaro digital libraries. The catalogue of Czech-language early printed books is accessible online within the electronic retrospective bibliography Knihopis. Foreign-language printed Bohemica from 1501–1800 are recorded in the catalogue Bibliography of Foreign-Language Printed Bohemica.

The Department of Manuscripts and Early Printed Books provides access to its printed collections through the online catalogue Portaro and in the form of the scanned card catalogue in the RetrIS system.

The conservation laboratory is part of the Department of Manuscripts and Early Printed Books, but it also provides its services to other departments of the National Museum Library. The conservators ensure comprehensive protection of the physical condition of the historical book collections ranging from preventive care (the control and maintenance of stable climatic conditions, inspections of the condition of the collections, precautions for handling rare books, the production of specific protective packaging, the supervision of the transport and installation of exhibits at exhibitions and during digitisation, on-site conservation and restoration interventions) to complex restoration interventions using chemical-technological analyses and instrumentation. All interventions are recorded and documented in detail. 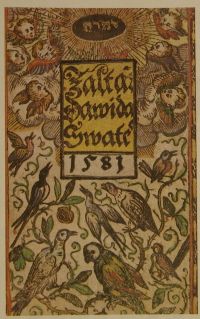